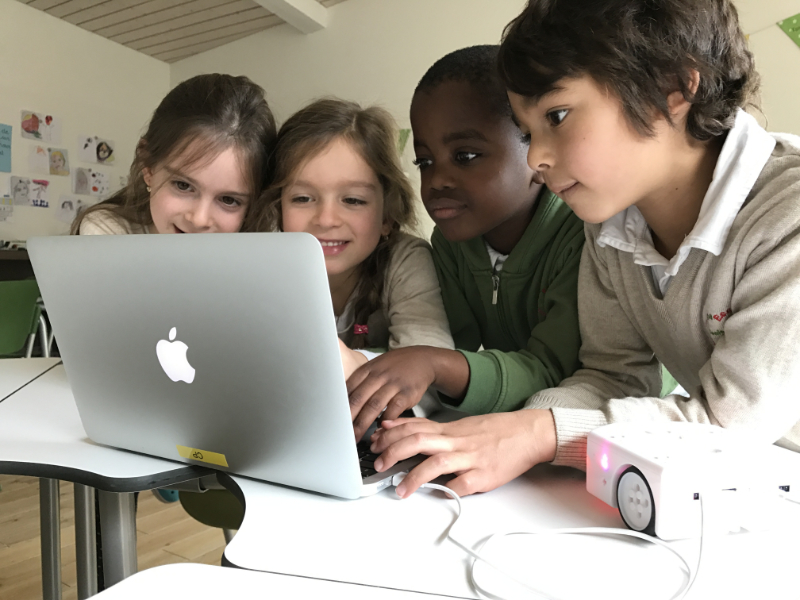 A Little Robot and Changes in the Thought Process

Learning the language of computers at the Primary school level is increasingly used all over the world. This skill can be applied across the curriculum and not only in Computer Science class as one might imagine. Nowadays, coding is not only a plus at school, but also an essential ability in everyday life.

A programmer has a certain way of thinking that he uses in many everyday tasks. In a dance the same action is repeated several times. The Macarena for example, a well-known dance is a logical sequence of repeated movements. A programmer would break it down into several phases, as this will allow him to understand it more easily: he would see it as a simple code that uses loops and functions.

A function is a collection of commands grouped under a given name. A loop is a program that allows you to repeat a specific instruction several times without having to rewrite it.

Coding is an activity that students learn with great interest because they can almost immediately see the fruits of their work on the screen. Whether it is programming, coding or robotics, there are a multitude of possible tools.

Thymio is a small programmable robot developed by the EPFL (Ecole Polytechnique Fédérale de Lausanne), which we use in our school with all students, from the youngest to the oldest.

Several levels of programming are possible, from Visual Programming Language (VPL) to text language. This makes it accessible to Primary school pupils. Easy to handle and manipulate, Thymio is a great educational tool for teachers. It has many infrared sensors, LEDs, buttons and other functions. In our school, this is mainly an introduction to algorithmic thinking (mathematical and numerical languages).

The skills developed the students are able to develop are the ability to break down a problem into simple tasks, recognise tasks that have already been completed and work on a common project, as well as spark their imagination and creativity. Coding also allows the student to develop trial-and-error strategies and thus learn that error is an opportunity for learning. This robot allows a wide range of teaching and learning situations. These abilities can be used to learn other subjects such as maths or languages. Rigor is required. Only one error and the code will not work. It would require for the programmer to rewrite and correct the program.

Finally, robotics educates the students to become a digital citizens, able to understand the way in which a robot works as well as its computer programs as they realise that a robot does not act by «magic»; it just follows the instructions the student has given to it within the given environment. By using the adequate tools it will be able to break down its task in several small steps in order not to become overloaded and understand that it is easier to work based on smaller, more attainable tasks.

Thus, the student thus acquires another way of thinking and intra personal skills that are useful in everyday life.